On Wednesday, May 18, 2022 a ceremony was held in Courtroom 1 of the Franklin County Judicial Center. 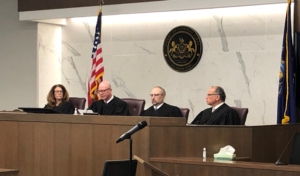 WELCOME & GOOD MORNING,
I want to thank all of your for taking a moment to help our court observe the 300th Anniversary of the Pennsylvania Supreme Court.

It is an amazing accomplishment considering these words I gleaned from the Declaration of Independence:
The history of the present King of Great Britain is a history of repeated injuries and usurpations, all having in direct object the establishment of an absolute Tyranny over these States. To prove this, let Facts be submitted to a candid world.

He has obstructed the Administration of Justice, by refusing his Assent to Laws for establishing Judiciary powers.

He has made Judges dependent on his Will alone, for the tenure of their offices, and the amount and payment of their salaries.

We see today throughout the world the efforts to undermine liberty, freedom and democracy.

We see a lack of confidence in public institutions, yet just yesterday voters came forward in the first step in deciding who our executive and legislative representative should be at the state and federal level. Having separate and independent branches of government enhance public confidence, they do not erode it. No matter the composition of makeup of a court, if the judiciary adheres to the rule of law, honors the oath of upholding the Constitution of the United States and our Commonwealth, the judiciary of our Commonwealth can contribute significantly to
our desired goal of providing justice to our citizens and that those same citizen have confidence in the administration of justice.

FCBA president, Anthony Cosentino spoke on behalf of our Bar: 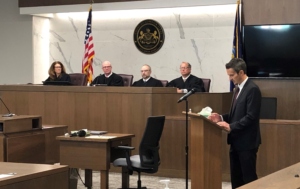 Thank you to the Board of Judges and to President Judge Meyers for the opportunity to be here on behalf of the Franklin County Bar Association, to share in celebrating 300 years since the official establishment of the Pennsylvania Supreme Court.

This is truly a proud day for the entire Pennsylvania judiciary, and for all who play a role in the administration of justice in Pennsylvania.

Judges, attorneys, court staff, row officers, and the public – we all play important roles in this ongoing success story of the Pennsylvania justice system.

Today is a chance for all of us to reflect on that story, to honor the past successes of the Court, and to best prepare for the future as the next chapter in the Court’s history is written.

The Pennsylvania Supreme Court is the oldest continuously operating appellate court in the western hemisphere, officially established in 1722, with origins dating back to William Penn’s provincial courts that began in 1684. Here, in our Commonwealth, a court system was created 54 years before our nation even existed. Not only has the Court survived, but thrived, issuing landmark decisions that have protected the rights of countless Pennsylvanians for the past 300

years, while also serving as a model for other judiciaries throughout our country, including the U.S. Supreme Court, as well as for other countries.

In our great democracy, founded on the rule of law with an independent Judiciary, where the law is to apply equally to all, and where we all are fortunate to enjoy liberty and freedom because the rule of law prevails, the very first Court was established here, in Pennsylvania.

Again, thank you for the opportunity to be here, and on behalf of the FCBA, we want to congratulate the Pennsylvania Supreme Court, our Board of Judges, and the entire Pennsylvania Judiciary on this momentous occasion.