FCBA member, the Honorable Shawn D. Meyers was sworn in as President Judge of the 39th Judicial District on Friday, December 6th. President Judge Meyers’ ceremony was attended by many of our members and his family in Courtroom One. 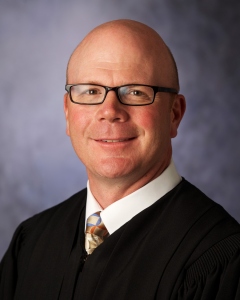 Since January, 2010 the Honorable Shawn D. Meyers has served as a judge for the Court of Common Pleas for the 39th Judicial District. He lives in Chambersburg with his wife, Nancy, a practicing attorney and shareholder with Salzmann Hughes, P.C. Nancy is also the FCBA treasurer.

President Judge Meyers is an active member of our Bar, serving on the Bench Bar Conference committee for many years. He has brought many quality speakers and his unique perspective and experience to our conferences.

We sincerely thank President Judge Meyers for his continued support of our Bar and community, and wish him well in his new role as president judge.