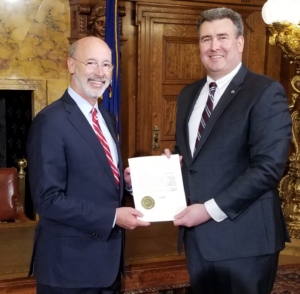 HARRISBURG, PENNSYLVANIA June 18, 2019 – Jason E. Piatt was recognized by Governor Wolf for his commitment to the Commonwealth of Pennsylvania. Mr. Piatt volunteered an unprecedented 1300 hours of time with the Pennsylvania Office of Attorney General and the Allegheny County District Attorney’s Office while he was a law student at Duquesne University School of Law.  While working for the Pennsylvania Office of Attorney General, Mr. Piatt defended Pennsylvania State Police troopers and Pennsylvania Department of Corrections officers in civil litigation alleging excessive force and constitutional rights violations.  During his time with the Allegheny County District Attorney’s Office, Mr. Piatt successfully contributed to the prosecution of homicides, narcotics trafficking, violent crimes, and other violations.   He personally handled over sixty preliminary hearings, all with favorable outcomes for the Commonwealth.  “Mr. Piatt proved himself to be hardworking, creative, and determined in the face of seemingly insurmountable challenges.  He has represented the values and traditions of the Commonwealth with great distinction.  His assistance in the defense of the Pennsylvania State Police and the Pennsylvania Department of Corrections was invaluable,” said Governor Tom Wolf.  Mr. Piatt’s public service hours were record-setting in the Duquesne University School of Law’s one-hundred-year history, eclipsing the prior record by over one thousand hours.

“Successful prosecutions of criminal cases largely depend on the efforts of the dedicated prosecutors who work together with law enforcement officers to ensure that justice will be served.  Also, of considerable importance are the efforts of those dedicated attorneys who represent law enforcement agencies in civil cases to defend the agencies in these legal proceedings,” said Pennsylvania State Police Captain (ret.) Sheldon Epstein.  “Jason Piatt has distinguished himself through his 1,300 volunteer hours and his efforts have contributed to the achievement of successful results in numerous cases.”

Mr. Piatt’s efforts were previously recognized by Letters of Commendation from the Pennsylvania State Police and the Pennsylvania Office of Attorney General.  Additionally, he was recognized with the “Distinguished Service Award for Pro Bono and Public Service” by Duquesne University School of Law and was named Law Student of the Year in 2016 by the Allegheny County Bar Association.

Post-law school, Mr. Piatt continues to support law enforcement and other first responders by volunteering with Wills for Heroes.  Additionally, he is currently donating his time as lead attorney of a case before the U.S. Court of Appeals for Veterans Claims on behalf of the widow of a veteran of both World War II and Korea.