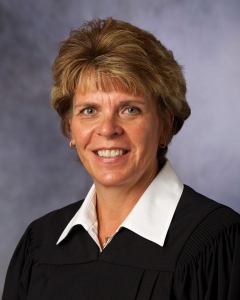 Judge Van Horn served as the 23rd FCBA president from 1999 until 2000. In 2010, Judge Van Horn was the 16th recipient of the Silvia H. Rambo Award in recognition of her exemplary contribution to the legal profession and society as a whole.

From the Women’s Law Caucus of the Penn State Dickinson School of Law award write-up: “The Rambo Award was introduced in 1994 by the Women’s Law Caucus to honor its first recipient, Sylvia H. Rambo, a 1962 graduate of the law school and the first woman to serve as chief judge of the United States District Court for the Middle District of Pennsylvania, where she continues to serve.”

“Judge Rambo’s commitment to the profession both as a lawyer and a jurist is an inspiration to all women that success is possible,” said Van Horn. “I am extremely humbled to receive this award given in her honor and to know that 23 attorneys and Senior Judge John W. Keller, who has always believed in me since the day he hired me as his law clerk, deemed me worthy of nomination.”

“During her 16 years in private practice, she regularly handled pro bono matters for victims of abuse. In addition to her accomplishments as a lawyer and jurist, Van Horn is actively involved in a range of community organizations, including Women in Need, the Chambersburg Rotary Club, the Chambersburg YMCA Board of Directors, the Chambersburg Chamber of Commerce Board, the United Way of Franklin County, and the Frances Leiter Center for children’s counseling.”

“Van Horn also has been recognized for her outstanding service with awards that include the Chambersburg YMCA Lifetime Achievement Award, the Statewide Adoption and Permanency Network County Collaborative Award, the Chambersburg Chamber of Commerce Athena Award, and the Women on the Move for the Tri-State Area Award.”

There are certainly not enough words to describe the countless contributions and accomplishments of Judge Van Horn to the practice of law, both as an attorney and a judge. The dedication and commitment she has shown to the residents of our counties and the betterment of the justice system is evident through her renowned and tireless work both locally and throughout the state. Judge Van Horn enjoyed a reputation as a fierce advocate for her clients as an attorney and continued that passion once she ascended to the bench. Judge Van Horn has been the constant champion of children’s rights through dependency, delinquency and family law work, and established herself as an esteemed criminal Court judge. Most recently Judge Van Horn along with District Attorney Matt Fogal, implemented Good Wolf Treatment Court to address the serious opioid and addiction crisis that our community is facing. Yet, despite all of these achievements, Judge Van Horn has never been one to be satisfied with mediocre, she never fails to push harder where she knows there is room for improvement; and somehow she inspires those around her to work towards the same. That is certainly a quality that cannot be taught.

Although there have been rumors circulating through the bar association about Judge Van Horn not running for retention, now that it is official, it is certainly with mixed emotions we as the bar association take the news. As much as we would love to have her run for retention knowing the amazing things that she has done for our communities and justice system, we also understand that there are other things in her life that deserve her full attention and that Judge Van Horn has absolutely earned the right to enjoy. We certainly wish her the best in this new, and well-deserved, phase of her life. We cannot thank her enough for her service and her leadership.